A few days ago I read about a new sculpture that's being erected in the centre of Perth, in Forrest Place. It's been named the "Angus Alien" after the creator, James Angus.

It was chosen in a million dollar competition, apparently. And who forked out the cash? Well, being funded by the Department of Culture and the Arts, ultimately it looks like the long suffering Aussie taxpayer did, as usual.

So, are West Aussies getting value for money? Well, to be honest, I don't think so. See, I went and had a squizz late last week and I have to admit to being distinctly underwhelmed.

I mean, have a look at it. A grand times a grand for this? 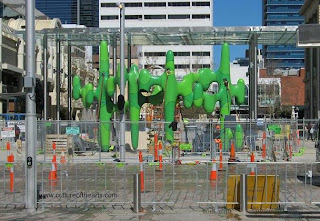 Sure, the thing isn't quite finished. As you can see there was a lot of fencing and stuff around it. There were also several workmen milling around too. 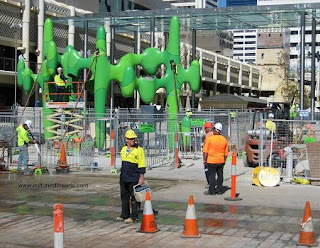 Hey, wait on ... What if the work was finished and they were actually part of the artist's master plan? Including actual living, breathing humans in art installations is way trendy these days, after all.

Certainly possible. There was one guy who seemed to be striking the same sorta-nonchalant and kinda-dreamy pose in various positions around the piece. He's the bloke in the bottom right hand corner of this shot. 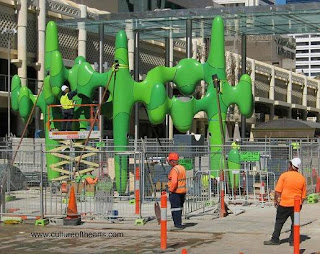 A bit later on, he was doing much the same thing on the other side of the sculpture. 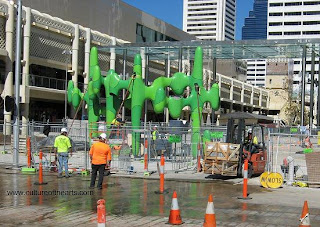 Maybe he wasn't some beefy construction worker thinking "what the hell is this crap?" after all, but a highly trained mime artist.

Yes, that was it! These were all organic elements in James Angus's grand vision! The audacity of it was just breathtaking. You would never have suspected.

They made it all seem like they were real, and the project still under construction. You really have to admire their creative skill -- not to mention commitment. Hell, not only did these guys completely look the part, they were stopping traffic, too. They were just totally into their roles. Must have taken months of character research ...

And some of this performance art can be dangerous, you know. Take this guy, assiduously pursuing his Stanislavskian objectives precariously a whole metre above his fellow thespians. 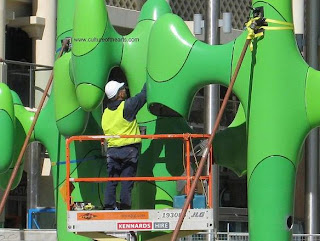 Brilliant. And brave. Well, I do hope he was getting paid equity rates. And I'm sure he was, and will continue to do so for the life of the project.

I'm gobsmacked. The concept is so sophisticated, and it's been realized with such amazing attention to detail. And it's all been achieved for only a million bucks ...

Hell, that's not overpriced. It's a steal!
Posted by MattHaydenAU at 9:11 PM