Perth art busker reveals the injustice of the arts world

A couple of days ago I was in the Perth CBD and I saw this art busker in the Murray Street Mall. As you can see he had attracted a respectable little crowd. People were impressed with his creation and looked on with genuine interest as he worked. You can't see from this shot but the plastic containers he'd left out for donations had more than a little change in them. 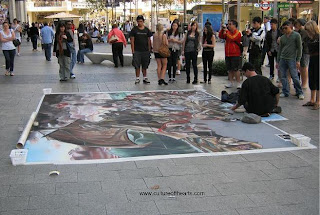 Of course the piece was quite straightforward and representational. It was also clearly a copy, since the original was in a book before him that he was constantly referring to. I'm no Robert Hughes but I'm sure some genuine, learned art critic would instantly be able to name it. (My guess is that it was a Caravaggio.)

UPDATE: Guess wrong. It's The Raft of the Medusa, by Theodore Gericault. 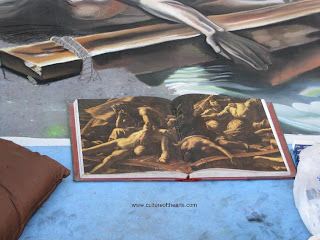 There was something admirable and even touching about the fact that this guy was being painstakingly faithful in his rendering of this beautiful and striking work. And there was no doubt that he'd been at it for ages.

I'm sure he'd be the first to admit that even though it was based on a masterpiece, the copy itself was not one. It seemed to be more of an exercize for him to hone his skills, give the punters some enjoyment and make a few bob in the process. It was an impressive achievement nonetheless. 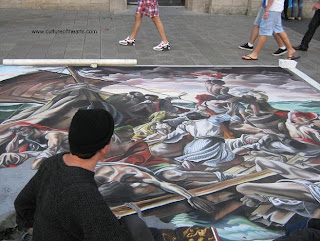 Just as he was not pretending to do anything other than what he was doing, people who stopped to look and give him some change were genuine in their reactions. They clearly liked what they saw, and were sincerely impressed by the guy's obvious skill and hard work. They willingly paid him what they thought his contribution to their stroll through the mall was worth.

Just a stone's throw from where I took these photos, over in Forrest Place, is another work of art in progress. It's what's been dubbed the "Angus Alien". It basically looks like a bunch of huge green sex toys glued together. And while there is definitely some design skill involved, it's quite a simple construction really. While it is mildly eye-catching in its own way, it could never truly be called beautiful. I wouldn't go so far as to say that it's an eyesore, but it sure as hell ain't eye candy either. The only thing that it has over what the art busker was doing is that it's an entirely original work.

It's pretty close to finished now but every time I've walked past it, there's never been a crowd assembled (aside from a few workmen). Yet that thing cost tax payers a million bucks -- a purchase that they were never consulted about.

There seems to be something very unjust about the fact that the bloke shown above -- who isn't a fraud and generously shows work that is undeniably skillful and aesthetically pleasing to passers by (who are so appreciative they willingly give him money) -- gets buggerall recognition from the art establishment for his efforts. Actually, they would probably sneer at him for being so traditional and "passe".

A well connected designer, on the other hand, gets his pretty ordinary creation realized to the tune of a million bucks basically because he knows what a bunch of brainless bureaucrats think is "so hot right now" and plays to their, er, sensibilities. And while this public art is purportedly meant "for the people", the people aren't buying it (er, even though they did).

Now, your typical po-mo plonker reading this will no doubt be rolling his eyes, appalled at my "philistinism" and lack of specific design knowledge. Well, I plead guilty as charged. I don't pretend to be a design expert. But even if the "Angus Alien" does have high critical value it must be remembered that it was built ostensibly to satisfy the public, not a bunch of pocket-pissing quackademics. I'm a member of the public, and I'm not impressed.

And this situation is by no means confined to the visual arts. You see it in theatre, film, literature, comedy, TV -- pretty much everywhere you look. In all of Australia's "creative" "industries" pseuds, tossers, wankers, mediocrities and flat out frauds get squillions of dollars thrown at them merely for being fashionable and politically correct. They routinely sneer at the interests, obsessions and values of the vast majority of Australians. And when they are commissioned to do work that is supposed to be primarily for the public's benefit and enjoyment, the public aren't that interested (usually because the work is crap). Most galling of all, the public ends up having to pay for this crap.

There's something truly rotten in the state of Artsville, folks.

Posted by MattHaydenAU at 6:40 PM