I'd read about this free show by Les Studios de Cirque called Place des Anges. In it, a team of angels descended from wires hanging over St Georges Terrace. They dumped heaps of feathers, and there were some natty light effects. I didn't go and see it because I'm a curmudgeon who'd much rather sit at home posting mean-spirited tweets and blog posts.

And frankly the whole idea did seem very strange to me. I mean, you'd think that angels in heaven would have better things to do than pluckin' ducks all day long, eh? And aren't they supposed to be into spreading love, joy and goodwill -- not stuff from dead birds? The fact that they decided to dump this matter on us reveals that they must have a pretty dim view of humanity. Sadly, that seems to have been confirmed, if the reaction of the crowd was any guide.

Anyhow, I didn't expect to see any remnants from the show when I was in the city yesterday. Yet there were still heaps of feathers strewn around the joint. Take this pile that had accumulated in Hay St, just near Pier St. I think it's safe to say that the stuff wasn't quite so magical in the harsh light of day. 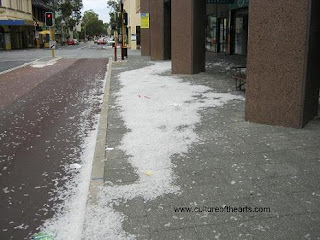 On St Georges Terrace there was still more of it. Did give this empty block a strangely desolate and wintry Northern European feel. Don't know about you, but this scene puts me in mind of the siege of Stalingrad. 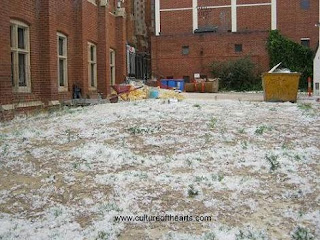 Hell, when gusts of wind blew strongly down the Terrace, there was even the odd mini-blizzard. I half expected to see some exhausted Russian soldiers trudge into view,  grimly carrying their wounded on a makeshift cart. 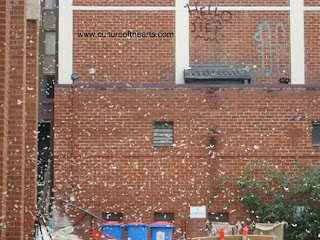 Some of the pretty botanical arrangements had been inundated with this obscene byproduct of mass avicide. The leaves were dying, clearly traumatized by the experience. Doubtless Gaia wept upon learning of such a fowl deed! 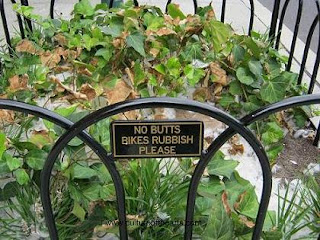 And just regarding that green angle in particular: The fact that there was all this litter composed of stolen animal products did seem quite ironic considering how deeply concerned about the environment arty types purport to be these days.

As a testament to its commitment to sound environmental policy the Perth International Arts Festival even has an official Environmental Sustainability Partner (Synergy). Then there's this case study relating to its partnership with URS:

In the lead up to the 2010 and 2011 Festivals URS assisted the Festival by providing contra environmental consultancy and developing a sustainability framework encompassing a vision, strategy, goals and tangible action items.  Subsequently, doing what we do in a more environmentally sustainable way has been embraced whole-heartedly by the Festival.

Sure, heaps of feathers strewn about the CBD might not pertain specifically to the subject of sustainability. But it certainly relates to the festival's "greenness" in general. You'd think that at the very least they would have consulted some animal rights activists, or even one or two duck whisperers, just to check that Place des Anges was environmentally, er, kosher.

The fact that they didn't shows how insincere they are about these issues. Don't know about you, but that really leaves me feeling down.

Hi, The feathers were not plucked from ducks - they are a by-product of the food industry. The feathers we imported are the same types of feathers that end up in your pillow or doonah. Regards, Perth Festival

Firstly, I'm not the one posing as a greenie. So the contents of my pillow or doona are irrelevant.

And your reference to the "food industry" is disingenuous. What you really mean is that the feathers came from the corpses of murdered chickens.

Hell, that's even worse. There's a good chance that PETA lawyer currently emancipating orcas will sue your ass for assault and battery! Get some good legal advice pronto, "Perth Festival", or you'll find your chickens really coming home to roost.
Posted by MattHaydenAU at 2:11 PM