No rush to judge Geoffrey from the luvvie Left. Different standard applies!

Will be really interesting to see how the Geoffrey Rush vs Daily Telegraph grudge match plays out, of course. Some thoughts about the context:

Firstly, the fact that a massive cultural icon has fallen foul of PC codes of behaviour says heaps. And it brings back memories of when I was a denizen of Artsville myself ...

See, I was a sometime actor and standup comic in Melbourne over two decades ago now. Joint was ultra right-on even back then. Lotsa bolshie babes arcing up about feeling "violated by the patriarchy" ... And there was heaps of haughty huffing about Helen Garner's excellent tome The First Stone.

Garner took issue with the punitive nature of academic feminism and how it was poisoning the waters between the sexes. I recall discussions I had about it with my arty frightbat pals. Their prevailing view was that shafting some fusty ol' dude was a small price to pay for women's empowerment. They also seemed to think it was perfectly acceptable that the accusers not be identified while their so-called abuser was left to twist in the wind.

Even back then this desire for retribution struck me as sinister and toxic. Fast forward to 2017 and sadly things are clearly a whole lot worse. This man hating feminism is absolutely everywhere!

It's all so hysterically OTT that one of the nation's most famous figures has fallen foul of it. 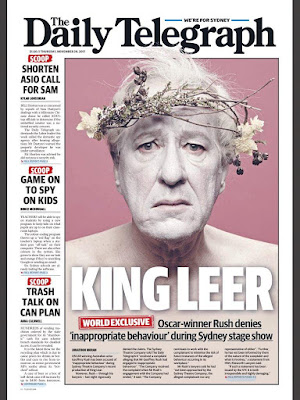 I do have sympathy for the guy. The accuser's identity is being withheld. And the nature of the allegation is just so vague. (Whenever I hear that word "inappropriate" alarm bells go off. So subjective. Could be anything.)

From what I can glean from reports it seems that Rush has been accused of transgressing personal boundaries in a performance, or something. Now, being (thankfully) well out of the luvvie loop I don't know any other details of this particular incident, or any related goss about the A-list actor and his alleged behaviour.

Maybe the guy's a big time lech who has abused co-workers, I don't know. If he is, of course that's wrong. He shouldn't be doing it and should be held to account and made to stop. It goes without saying that men -- particularly those in positions of power and influence -- should treat women with respect and keep their hands to themselves.

But so often the way that these issues are dealt with in the workplace is utterly absurd. Thanks to the toxic influence of victim feminism, many young women believe that almost anything a bloke does or says in their presence can constitute sexual harassment. And rather than learning to stand up for themselves against treatment they find demeaning or offensive, they are encouraged to tell their employers, who are then duty bound to punish the alleged perp (without telling him who complained!).

So, obviously the politically correct culture that dominates the arts world (and many other workplaces, for that matter) has had much to do with precipitating this very scandal, along with many others.

Speaking of which: If Rush deserves the benefit of the doubt, then so does everyone else who's been similarly accused. And that has definitely not been the case.

What's fascinating is how selectively punitive PC standards are applied -- particularly by the most zealous feminist crusaders.

They say all women's accusations should be believed. But they'll happily reverse that view if the accused is on their side -- regardless of the evidence. Amazing to see so many of Twitter's frightbats, who regularly assume the worst about sexual assault and harassment accusations levelled at their enemies, are either just not tweeting about Rush, or even actively defending him. (Of course he may well be innocent of all charges. It's the inconsistency that's so notable.)

Clearly, they don't wanna be seen as attacking this fellow travelling cultural icon. Cushy gigs, along with invites to glamorous film star-filled events and soirees might dry up. No way will they risk that happening!

The fact that Rush is now suing the Daily Telegraph makes the issue far easier to deal with for these selectively outraged socialist sisters (blushing violents, I call 'em). They can arc up about eeevil Rupert's right-wing henchpeople and their brutal, defamatory culture.

But really, that's just shooting the messenger. IMHO the culture that's more deserving of condemnation is the one that dominates Artsville generally, and Sydney Theatre Company in particular.

Questions that really need to be answered, among others: Did this guy really do something wrong? If so, exactly what was it and who was the victim? If the claims actually turn out to be bogus, why were they made in the first place? And in that case, shouldn't the original accuser be named, and punished for her lies?
Posted by MattHaydenAU at 12:44 PM