Gawd, but we live in strange times … In days of yore po-faced moralists decided what music people could and could not listen to. Puritanical preachers warned against “satanic” rock 'n' roll, remember? To them "Elvis the Pelvis” was the devil himself!

Now it's the musos wagging their fingers, making censorious demands. Darren Hayes, Colin Hay, Jimmy Barnes and other superannuated ol' rockers are imperiously deciding who can and cannot listen to their songs!

But to be fair, it's actually not their fault. They're just being used and aren't aware of it … Basically, the farcical mass tanty over Cory Bernardi's Australia Day playlist is primarily the result of cultural Marxism. These malevolent crybullies, who totally control the ABC, Fairfax, most unis and many other institutions besides, are totalitarians who turn everything upside down. In their insanely arse-about worldview right is wrong, division is unity, bigotry is tolerance, and censorship is freedom. 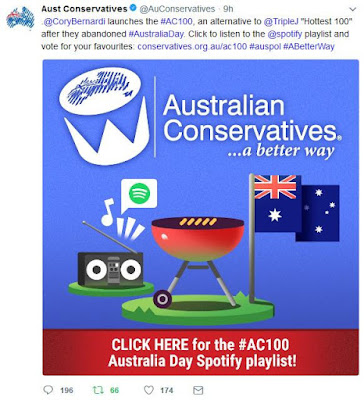 So completely have these ol' musical dudes been duped, they reckon it's Bernardi who's the only one politicizing their music. WRONG! If anything, he's trying to de-politicize it. The people who most aggressively associated their hits with a specific agenda were the sneering hipsters at Triple J. These virtue signalling twats moved their Hottest 100 countdown to Jan 27th, purportedly so as not to offend Indigenous people.

Yeah, right! Zif the smug whitey-tighties at the national broadcaster genuinely give a rat's clacker about the issue ... This “change the date” bollocks has been primarily driven by the Greens, remember. (Think of all their local council shenanigans in recent months.) And that party is so dang pallid, it should be called "The Whites".

After lowlife cultural Marxists pulled this swifty, no iconic Aussie muso dared utter a peep of protest -- even though I'm sure many were not happy about the shift. They knew that if they had, they'd be falsely slimed as raaacist! by the usual suspects.

So along comes Cory Bernardi and says let's do what we always did: retain a kind of "Hottest 100" on Australia Day to celebrate great Aussie musical talent! Without a radio station of his own he did the next best thing: create a Spotify playlist.

And this is what so many Oz musos are losing their shit over! By opting into Triple J's nasty divisive narrative, they're basically saying that having their hits counted down on Jan 26 (still the official date for Australia Day) is somehow eeevil and raaacist.

So if it's eeevil and raaacist to be part of a national musical countdown on Australia Day now, surely it was in the past, too? So, why didn't Darren Hayes, Colin Hay, Barnesy, and all the others presently poncing about indignantly ever express any disquiet back then?

If the PC narrative is valid, think of the countless Aboriginal hearts those rockers broke by having hits played on Jan 26 year after year! The artists who sledge Bernardi's AC100 playlist must renounce all previous Triple J Hottest 100 inclusions. If they don't, surely it means that they actually take pride in genocide; that they are okay with “Invasion Day”. Shame on them!

In any case, it's been amazing to watch how it escalated ... Started with serial offense taker Darren Hayes being triggered by Bernardi's playlist. 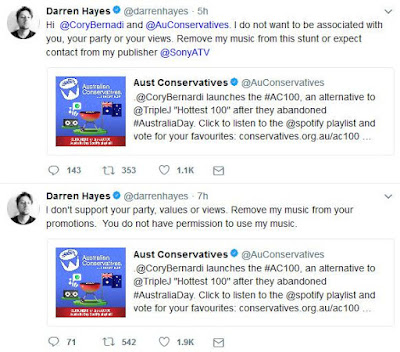 He rustled up some outrage from his peers via Twitter.

This prompted a response from Cory Bernardi, which I think summed up the situation well. He's right, music is for everyone -- it's apolitical. Clearly, he's been trying to keep it that way with his "campaign". 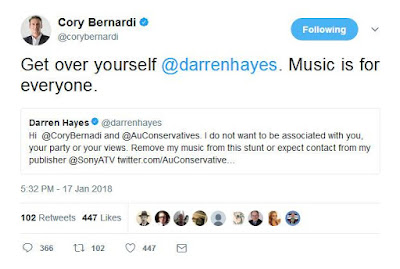 Before long it had become a snowflake tsunami. Pretty much the next day it was front page news! (I think the Daily Telegraph hit the right note, BTW. In their cover, it's Bernardi who's the rebel. Conservatism is the new counterculture, remember!) 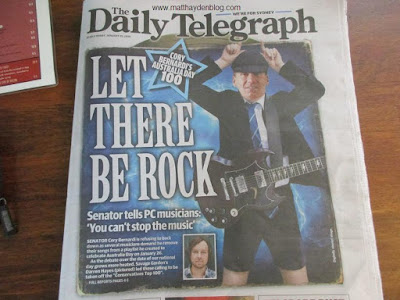 Some of the rockers' reactions have been so pompous and silly it's incredible. Take Colin Hay, who actually advised the South Australian Senator to go and get stoned. As Stefan Molyneux would say: "Not an argument!" 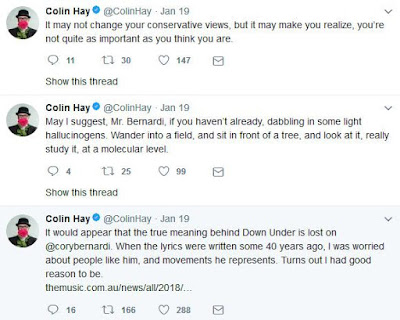 Barnesy's outburst was a doozy. He received an Australia Day award just last year. If he thinks inclusion in a playlist on Australia Day this year is beyond the pale, then surely he should hand it back, shouldn't he? That would be the very least he could do. 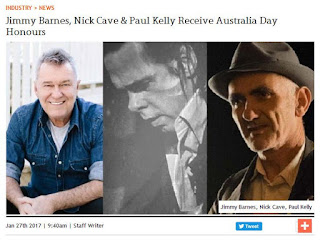 FFS ... Why would anyone listen to anything Jimmy Barnes says, especially about politics? 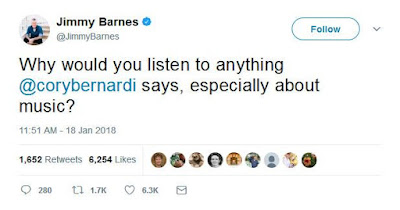 Latho offered some pithy observations on Twitter regarding Darren Hayes, prompting so-called comedian Lehmo to come to Dazza's defence. (Actually, it must be one of the first cases of a bloke white knighting for another bloke. I suspect we might see much more of it from now on, given that the traditional kind almost certainly qualifies as sexual harassment these days.)

In any case, check out Lehmo's last line in this interchange. Does that seem like a reasonable response to Latham's previous tweet? Looks like a classic case of projection to me. 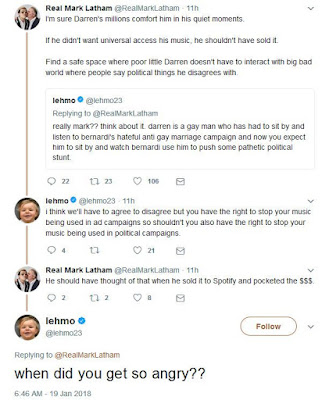 As well as being overtly sexist according to today's PC rules, Troy Cassar-Daley's contribution was ironic as. "Music brings people together and doesn't divide." That's exactly what Bernardi was saying! People from across the political spectrum enjoy it -- including conservatives -- which is why demanding to be taken off the playlist was the truly divisive choice! 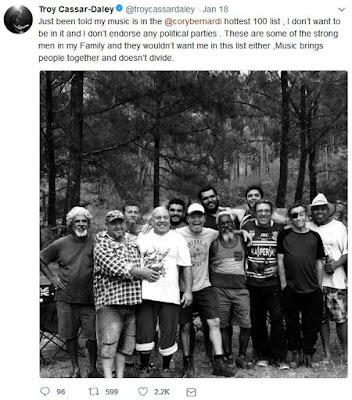 Then there was Mick Thomas, of Weddings, Parties, Anything. ("Anything"? Anything the loony Left says is acceptable, it seems. And screw everything else ...) 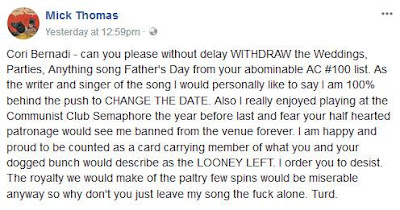 Actually, I think Thomas's contribution was the most revealing of all. He flat out states that fear of being banned by a commie venue is a major motivation for his dummy spit. Then he adds that being included in the playlist wouldn't be worth his while financially anyway.

I'd say these two factors were key in all the other cases of outrage. The superannuated rockers were terrified of being smeared as bad, evil and wrong by association with one of the PC Left's prime hate figures. This would result in a net loss of earnings for them, at least according to their calculations. And that's why they kicked up a stink.

So, in the end, really nothing to do with a sincere concern for the feelings of Aborigines. Just faux outrage as usual ... Gawd, what a sad ol' bunch of fools they are.
Posted by MattHaydenAU at 11:16 AM