PC Labor killed comedy and became a joke itself. Sad!

Back in the day when I was doing standup and character comedy in Melbourne I could see how political correctness was slowly poisoning the medium. It was one of the main reasons I gradually lost my enthusiasm for it.

I thought maybe there would be some kind of resistance against this creativity-killing force from the comedians themselves. We would certainly grumble about it often.

But nothing like that ever happened. That was because the Australian comedy scene -- much like in America and the UK -- is chockas with lefties and liberals. So, PC was seen as the lesser of two evils. Resisting it would mean you were a rightie, that most vile of creatures!

The monster of cultural Marxism has been getting increasingly ferocious over the years and even bit a chunk out of one of our greatest comic talents, Barry Humphries. He was officially condemned for thought crime by the Melbourne International Comedy Festival organizers and they even removed his name from an award!

This was a petty, nasty and humorless thing to do. Shows that they are the last people who should have anything to do with comedy. But sadly they control it utterly now right across the country. They make sure that the only shows that get featured at their events are dreary right-on fare.

That's why I thought it was quite symbolic that a major venue for the Sydney Comedy Festival (Sydney Town Hall) doubled as a polling place for the federal election last weekend. 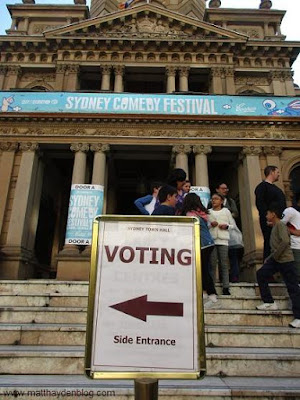 While the Labor Party has not been quite as deeply infected by the mind virus as, say, the Greens, it's copped a bloody big dose of it and is clearly deeply unwell. Identity politics -- victim feminism in particular -- now dominates that party.

Given how many arts funding decisions are made by governments -- state ones in particular -- there's no doubt that the kind of entertainment on show at these festivals has a lot to do with what's been going on in the ALP. 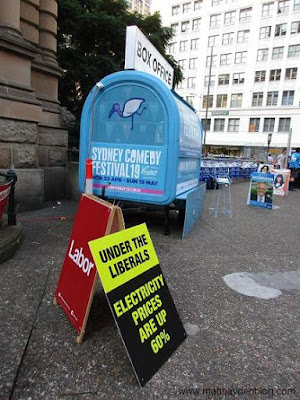 As I entered the building to cast my vote I was dreading the thought that Labor would win, but still very optimistic that the LNP would retain government.

Thankfully this proved to be the case. While there were many economic and cultural forces behind the result, a substantial factor was clearly a widespread rejection of PC. Australians have had an absolute gutful of smug elitists telling them what they can say, think and feel. They elected a PM who understands their frustration and has pledged to address this problem.

He may not be warrior for plain speaking common sense on the scale of Trump. But I'm sure he'll do some serious work in dismantling the control matrix that these creepy totalitarians have built up over the years.

The challenge for Labor is to take a long hard look at itself and see how poisonous this ideology actually is. It not only makes the normies miserable but massively impacts their own prospects at the next election. They really need to dump it.

Something tells me they won't. That's sad.

I doubt that Aussie comics will either, since they're so beholden to their left-wing political parties and figures. That's sadder still.