There has been talk about a Crocodile Dundee reboot with American comic Danny McBride playing Mick Dundee's son. But it looks like it's some sort of viral marketing stunt to boost tourism.

My own reaction to the possibility of this sequel: It would've been very unwise since Hogan himself was the perfect Dundee. Now that he's old and wrinkly it just wouldn't work. And attempting to get a younger Yank to carry off something so definitively Australian would just be cynical as -- a real case of flogging a dead croc.

But that's not the main grievance from the sneering hipster set. Trapped in the thought prison of political correctness, they find the very idea of the larrikin Aussie bloke so memorably epitomised by the iconic Hogan character as appalling -- even socially dangerous -- in itself.

A recent column by Luke Buckmaster of The Guardian is a case in point. Dude is so humorless, it's like a mini-comedy in itself -- a self parody to be exact.

Like so many on the cultural Left, he seems to believe art is not a mirror held up to (human) nature, but a tool to manipulate viewers into some kind of behavioral ideal. He seems not to understand that when people see a comedy they don't actually look for directions on how to live their lives. They just want to escape from reality for a while and have a laugh! 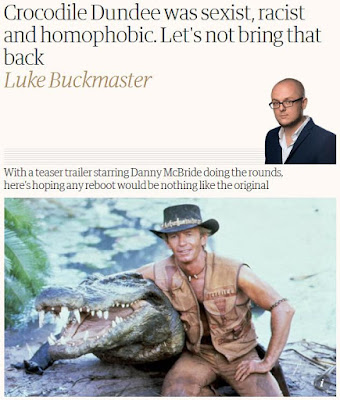 Of the rumoured project Buckmaster writes:

So if we assume the unthinkable: that this project is actually going ahead (though Screen Australia has not confirmed it), what would Dundee: The Son of a Legend Returns Home need to do to capture the spirit of the original three Crocodile Dundee movies, released in 1986, 1988 and 2001?

For starters, in addition to being vulgar and witless, the new film would need to be sexist, racist, homophobic and transphobic. It would need to have awkward jokes unfunny at the time of release and even less amusing when revisited years later.

"Sexist, racist, homophobic, and transphobic." Gawd. For today's serious young insects, they're like the Four Horsemen of the Apocalypse!

And "unfunny" to whom? Surely not the millions of people across the globe who lined up outside theatres to watch the movie and laughed out loud at regular intervals as it was projected before them. Being one of them I remember this well.

Anyhoo, if Buckmaster's profile photo is any guide, it looks like he himself hasn't yet hit forty. Did he even see it in the cinema back then? If so, he must have been a mere whippersnapper -- and a sullen one at that.

He then describes a scene he found particularly offensive:

Take, for example, a scene from the original film, based in a pub in New York. Mick Dundee (Hogan) chats up a trans woman, before a friend pulls him aside: “I’ve been trying to tell you all night, that girl, she’s a guy!” Dundee responds by sexual assaulting her. He grabs the woman in the groin area, then points and yells: “A guy dressed up like a sheila! Look at that!”

The pub erupts into laughter and applause. There are high fives and back slaps.

Yeah, because it's like, a movie. It's not real. It wasn't actual sexual assault, and the scene wasn't somehow exhorting people to go out and commit violence against the transgender community. It was just a joke about the rural Aussie bloke Dundee's complete lack of urban sophistication (for want of a better word).

Buckmaster doesn't just find the character of Dundee deeply threatening to today's social fabric. In his view the American woman who takes him to the Big Apple is also guilty of "wrongthink" (although this is ameliorated by the fact that she's a pawn of the patriarchy who lacks "agency").

Sue, a journalist, initially appears to have a reasonable amount of agency, before we learn she is dating her editor and her father is the publisher. During a quiet scene in the original movie (directed by Peter Faiman and written by Hogan, Ken Shadie and John Cornell), Sue complains to Dundee about a previous lover. She says this guy is a lefty type, “probably marching right now, for the gay Nazis or something”. 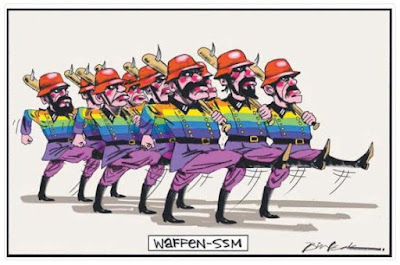 If poor Luke found that line upsetting, imagine how triggered he must have been by the late Bill Leak's brilliant toon!

Rather than make me look back in anger (or rather, sneering disdain) at the original Crocodile Dundee, elements like this increase my affection for it. Clearly, the film was lightheartedly reflecting some significant and enduring issues.

It wasn't trying to change the world. It was just having a laugh it what it was like! And isn't it interesting how much has remained the same?

It's not just the rainbow fascism in particular, by the way. Think about that tranny scene mentioned above. Dundee's description of the "woman" as a "guy dressed up as a sheila" is now called "misgendering". It was a faux pas back then and now it's actually illegal in some parts of the Western world.

Dundee's blunt description basically captures the argument against transgender totalitarianism: A man dressed as a woman (with or without his genitalia surgically removed) is still not a real woman.

Hate to break it to ya, hipsters! The truth remains the truth, no matter how much you tell yourself otherwise.

That's why that scene, along many others in the original movie, will continue to get laughs -- even though Buckmaster and his sour-faced ilk are so appalled by them.
Posted by MattHaydenAU at 11:30 AM