The reaction to this recent Superbowl marketing stunt utilizing the classic Aussie comedy Crocodile Dundee has been fascinating. Seems that squillions of people are genuinely keen to see a fair dinkum reboot of the movie series!

The NT News has even been running a campaign to make it happen. 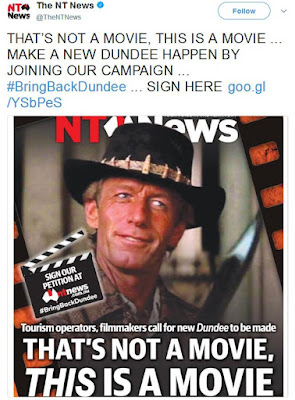 When I first heard about the idea of a sequel centred on Mick Dundee's son I thought it wasn't a very good one. But given the interest it's provoked in recent days I've actually warmed to it.

As far as I know the hoax trailer had Yank comic Danny McBride as the lead. But of course you'd need a real Aussie bloke playing the main character -- not some bloody seppo! I think Chris Hemsworth would do a great job.

Clearly the massive support for such a movie being made is driven in part by widespread frustration with political correctness. Without a doubt many Aussies believe that their country does have a distinctive national character, best exemplified by the laconic, blokey Dundee. Obviously this idea upsets the cultural Marxist crowd, which makes it still more appealing to local normies.

With that in mind there's another comical Aussie icon that I'm sure many people would love to see brought back to life on the silver screen: Barry McKenzie.

Bazza was one of Barry Humphries' best known creations from early in his career. (Here's the satirist's autobiography BTW. A fascinating read.) It was made into a commercially successful film by Bruce Beresford. 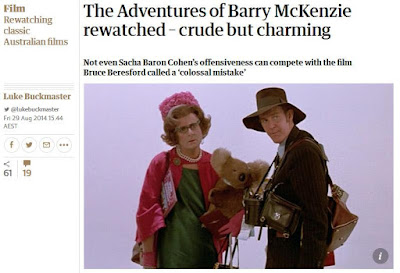 Not surprisingly this variation on the yobbo stereotype is distasteful to today's "culturally senstive" smart set. Guardian reviewer Luke Buckmaster's opinion of the McKenzie movie was a bit kinder than it was for Crocodile Dundee. But he still found the humour in it deeply offensive:

The jokes in The Adventures of Barry McKenzie are racist, sexist, homophobic, xenophobic and guilty of virtually any other derogatory stereotyping you care to name. Bazza’s zingers include “When it comes to fleecing you, the Poms have got the edge on the Gypos”; “hungry Arab, would have dropped the bastard if he wasn’t qualified for the pension,” and “I’m that thirsty I could drink out of a Japanese wrestler’s jockstrap.”

Ha! The lefteous indignation that such jokes provoke (even if they themselves aren't that funny) is actually amusing in itself.  All the more reason this character should also be brought back to life, IMO.
Posted by MattHaydenAU at 11:55 AM